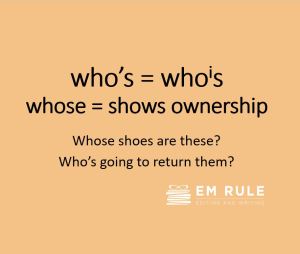 Who’s and whose actually follow the same rule as it’s and its. Who’s is always short for who is; whose is the possessive.

Two former workmates taught me a good way to remember this – have you heard of Who’s Who? It’s a British publication that gives basic information about a number of well-known people (you can find out more about it at Who’s Who on Wikipedia). In the publication’s title, Who’s is short for Who is.

My workmates used the phrase “Whose Who’s Who is it?” as a quick check of which one to use. They knew that the book was Who’s, short for who is, so therefore whose meant who did it belong to.
(*thank you to Gabrielle and Mary for teaching me this example in the dim, dark, distant past.)

For more about apostrophe use (and abuses to avoid), check out my post Using apostrophes.

Kate Morgan-Riggir has over 25 years’ professional editing and proofreading experience, and more than 20 years’ experience writing for businesses. She can help turn your writing into content you’re proud of; and if you don’t have time to write that report or web content yourself, she can do it for you.
Get in touch to find out how Kate can help you.